Boiler has no pressure - What do I do? 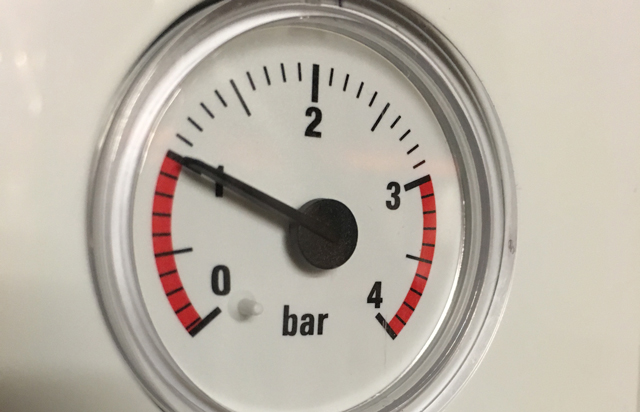 When your boiler has no pressure, for safety it will shut down.

It is always a worry when you come to switch on your boiler after a long period of not using it and you find that the boiler is indicating that there is no pressure. There is no need to panic and first it is better to understand why you don't have any pressure.  Then ascertain what you can do to rectify the problem.

The lack of pressure is only a problem in pressurised systems and theses include System and Combination boilers which work on a sealed heating circuit. The pressure is created by an expansion vessel which has a diaphragm bladder inside it that contracts and expands with the increase and decrease of volume of water in the system. A conventional boiler or open vent does not have an expansion vessel and relies on a feed and expansion tank. These systems are fine and have been used in the UK for many years but they are slow to react and cannot be used on a combination boiler.

The black needle represents the pressure your boiler has, the red needle (or red area on the gauge should be the overpressure point.Most boilers operate well between 1.5 and 2.0 bar)
The largest market for boilers in there UK is and has been for many years combination boilers and they make up over 80% of the market sales. They have a built in expansion vessel and require water to be constantly held with in the circuit as they are instantaneous water heaters. System boilers are also reliant on pressure held within a circuit and like there counterparts the system pressure is normally around 1.5 bar to create normal working pressure in a system.

So why does your boiler lose pressure? What causes it? and how can you fix it?

There are a number of reasons why and the first can be quite simply down to lack of use or an amount of water being lost from the system by leaks or minor evaporation or boiling over into the safety valve. Water expands as it heats up and contracts when it cools so this is the requirement for the bladder in an expansion vessel. These can split or degrade and then just like a football it can go down and the system will not pressurise. This can be the first reason for the system showing a lack of pressure but there are reasons. These would include as mentioned water loss or a leak meaning that the pressure would drop and in most cases the boiler would not fire up.

If you have been away for a long period or the property has been vacant for some time then be really careful as it is often the case that the water would be very cold so indicating a low pressure but obviously most systems do not go below 10*C if it is a resided in home. So always top up your pressure slowly and in stages otherwise you will over pressurise and the safety valve will discharge into an overflow.

Furthermore if you have only been using the boiler for hot water on either a combi or a system boiler you may find that the system levels have dropped due to natural evaporation or air that was trapped. Trapped air can give a false reading on a pressure gauge so always make sure that you have bled all the radiators before topping up. You also get natural evaporation as you constantly heat and cool the system during the winter so topping up can be frequent but if it is too frequent then you definitely have a leak or an issue.